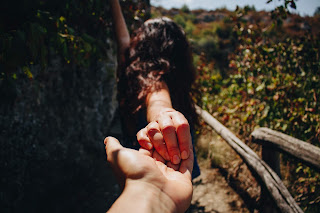 Photo by Dineslav Roydev on Unsplash
This morning (as I was doing what I encourage my clients to do daily ~ their own thought work!) it hit me just how powerful the tools I get to teach to others really are and how much they have impacted my own life.  So I thought I would share the three beliefs that have changed for me over the last year and how each new belief has changed my life.
#1 ~ When I spent a week entirely immersed in coaching and being coached myself, I became aware of a deep, long-lived belief I didn’t even realize I had ~ the belief that I *wasn’t* ever quite enough… as a wife, mom, daughter, sister, friend, chairman, neighbor (the list could go on)… not ever enough.  My new-found awareness of this over-arching thought, and the realization of how it permeated everything I did, was so shocking to me and so sad to me, I decided to put a stop to it.  And I did.  I had to practice it for a while but now I know *I am enough* and it has made all the difference in my life, and even I can see how I now show up as the person I really want to be rather than a watered-down version of me.
#2 ~ During my certification period to become a life coach I began to realize that I often told myself I never had very good questions to ask.  As soon as I noticed this, I remembered back to my many years of teaching and mentoring, and realized that every time I prepared to lead a discussion I had always thought the same thing.  Well, I could clearly see this wouldn’t be a helpful belief if I wanted to be the best life coach I could be, so I determined to change it.  And I did.  Again, I had to practice “I ask good questions” for a while; I even giggled out loud in the beginning because it didn’t feel true, but I kept practicing it anyway.  Several months later, not only do I hear myself asking good questions, but several times a week I’m told, “Wow, that is a good question.”
#3 ~ Anyone who has built her own business (or even tried!) knows the experience is full of highs-and-lows, and oftentimes it’s discouraging.  Instead of dwelling on how hard it is to find the people I want to help (“It’s hard to find my niche clients”), I decided to concentrate on this thought:  “I’m learning to find niche clients.”  Until today.  During my thought work today I realized that while “learning to” was a good step from “it’s hard,” I’m now ready to believe “I know how to find niche clients.”  And I will find them because it’s my heart’s desire to help them.
We spend a lot of time on our physical and spiritual health (and rightly so!) but we often don’t see the importance of working on our mental health unless we’re mentally ill.  However, becoming aware of the thoughts I shared above allowed me to decide whether or not they were serving me well.  When I realized they weren’t I was then in a position to make a choice to keeping thinking and believing that way, or not.  And while I can’t always change the situation I’m in or the challenge I’m facing, I *can* determine how *I* want to show up, no matter what is going on.  Even in parenting our teen and young adult children.  In fact, especially as we parent them.

“Find Peace in Parenting” isn’t just a nice saying or a hopeful thought.  I know it’s a possibility for anyone who chooses to learn how to manager her own mind.  If you want “peace in parenting” to be *your* reality ~ contact me now at kelly@findpeaceinparenting.com.  Peace awaits.  Come on, I’ll show you how!

Awareness is the keyfind peace in parenting, LDS, Mormon moms